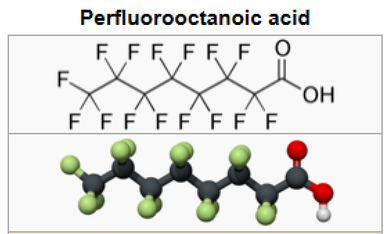 For two generations the military has used these harmful chemicals in routine fire training exercises and has allowed the highly cancerous materials to leach into the groundwater and to contaminate the drinking water of local communities. All along, the military knew of the dangerous potential of these chemicals. PFAS causes a host of cancers, causes several childhood diseases, and damages a woman’s reproductive health.

​California regulates just two of the more than 5,000 varieties of PFAS. They are known as PFOA and PFOS.  When the combined total of the two substances exceed 70 ppt in drinking water the California Division of Drinking Water recommends that water providers remove the contaminated source of water from being used for public consumption.  In 2019 the state established Notification Levels of  5.1 ppt for PFOA and 6.5 ppt for PFOS. When the Notification Levels are exceeded, the Division of  Drinking Water (DDW) recommends that the source be removed from service and treated. Meanwhile, scientists from Harvard’s Public School of Health say 1 ppt of PFAS in drinking water is potentially dangerous.

Rather than making recommendations, several states have adopted enforceable limits at 20 ppt for the two substances - for drinking water and groundwater. 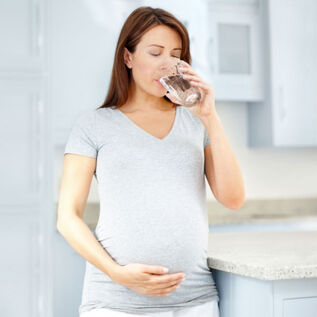 Pregnant women should never drink water containing PFAS.
The greatest fear concerns the health of vulnerable people who are served by individual wells and live close to military bases where the poisons have been dumped into the ground for 50 years.  All private wells throughout the state should be tested for the carcinogens and the state must forcefully regulate these poisons.

There has been an amazing and sudden awakening over the harmful effects of PFAS in drinking water. Although overdue, the California State Water Resources Board recently tested 568 municipal wells across the state for PFAS.  Curiously, the testing generally stayed away from communities near military installations. 308 of the wells (54%) were found to contain a variety of PFAS chemicals. 19,228 parts per trillion (ppt) of the 14 kinds of PFAS tested were found in those 308 wells.

Although the DOD was not a focus of this investigation, one base, Naval Air Weapons Station China Lake has contaminated a well at 8,000,000 ppt.  Port Hueneme has 1,080,000 ppt in the groundwater. Tustin has 770,000 ppt. 30 other military bases in California report alarmingly high levels of PFAS contamination.

The DOD has argued in court against states that it has “sovereign immunity” from claims stemming from damages caused by these forever chemicals.  Even if California steps up to establish MCL’s for PFAS this doesn’t stop the military from continuing to pollute the environment. This must change!

This is the stuff of secession.  The federal government has no right to poison the people of California.

Neither the commercial media nor the state seems willing to tangle with the DOD and that’s why so little is known of the military’s role in contaminating California’s environment. The  website  www.militarypoisons.org and the upcoming tour hope to change that.

The website attempts to list every contaminant in the air, ground, and water on every California military base - both active and closed. The site has a page for every base in the state and its contamination history. Users can compare the contaminants in their water report found online to the chemicals deposited into the surface water and aquifers by the closest military installations.  The powerful search engine provides a service that has never existed heretofore. For instance, search for “radioactive” and find a history of radioactive materials and disposal at 48 bases.  Click around and discover that Daggett, a town adjacent to Barstow Marine Corps Base has Uranium in drinking water above legal limits. Search for Chromium VI, Erin Brockovich’s passion, and find 20 bases that have dumped the stuff into the ground.

The EPA has not changed water quality standards in almost 20 years, yet modern science has developed tens of thousands of new chemical formulations since then, and many may be making their way into our drinking water.  Enforcement is up to the states.  “We want to get people to start thinking about the chemicals in their water," says Pat. “And we hope to influence lawmakers to eliminate all PFAS in drinking water and groundwater.  We must force the military to clean up the mess it has created and pay for the harm it has caused to people and the planet." 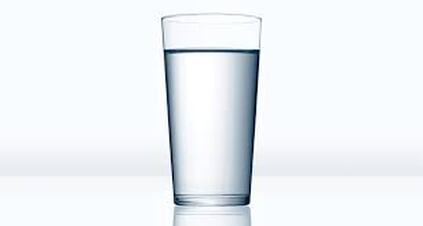 If you receive a water bill, you have likely been provided a hard copy of the list of contaminants in your water.  In California it is difficult to access your report online. First, try to use the state’s drinking water supply service area Lookup Tool.  We’ll put in 1201 Mercedes Lane Santa Barbara CA 93101. The site identifies the City of Santa Barbara Water Department as the water service provider.  If you cannot find your provider, use

Next, access the Environmental Working Group’s Tap Water Database. Entering 93101 for our Santa Barbara house, the results show that 14 of the contaminants on the Santa Barbara Water Report exceed the scientific group’s  health guidelines.  Getting a passing grade from the federal government does not mean the water meets the latest health guidelines. After all, legal limits for contaminants in tap water have not been updated in almost 20 years, while the scientific community has gathered a tremendous amount of research linking many of these chemicals to cancer and a host of health issues.

You may notice that your water report omits data on the deadly class of carcinogens found in drinking water called per-and poly fluoroalkyl substances, or PFAS. The EPA fails to classify these as hazardous substances, so they’ve not been regulated or tested. This is changing in California. Beginning in 2020 water systems will be reporting on these carcinogens. PFAS is used in heavy doses on military bases throughout the state. The substances are allowed to seep into groundwater, contaminating municipal drinking wells.
You can use this search tool by entering your zip code to identify the contaminants associated with nearby military installations that may be contaminating your water.
​
Finally, if you obtain drinking water through a well, you ought to have it tested for contaminants, including PFAS chemicals. Ask you water provider how to proceed.