MILITARY POISONS
Pentagon directs public attention to water
as the primary source of PFAS contamination in people
The primary route of exposure to PFAS is through the diet, especially seafood
By Pat Elder
August 25, 2020
​ 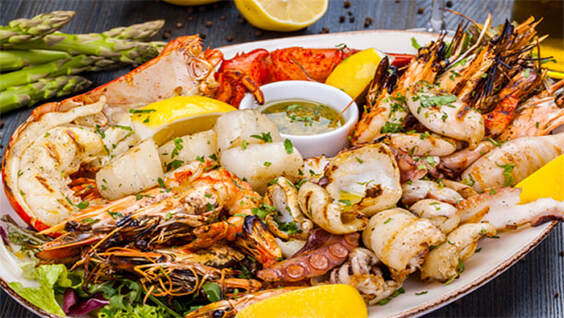 There could be more PFAS contamination in this seafood platter than drinking water containing 70 ppt of the toxins for a lifetime.
The military is engaged in a campaign to convince the public that the PFAS contamination it has caused on military bases around the world is being cleaned up and that it is safeguarding public health by complying with the EPA’s lifetime health advisory of 70 parts per trillion in drinking water. For the most part, both claims are false.

The DOD knows the primary route of exposure to PFAS is through the diet, especially seafood from contaminated water bodies, although this truth is treated like classified information.   The European Food Safety Authority (EFSA) estimates that “fish and other seafood” account for up to 86% of dietary PFAS exposure in adults." 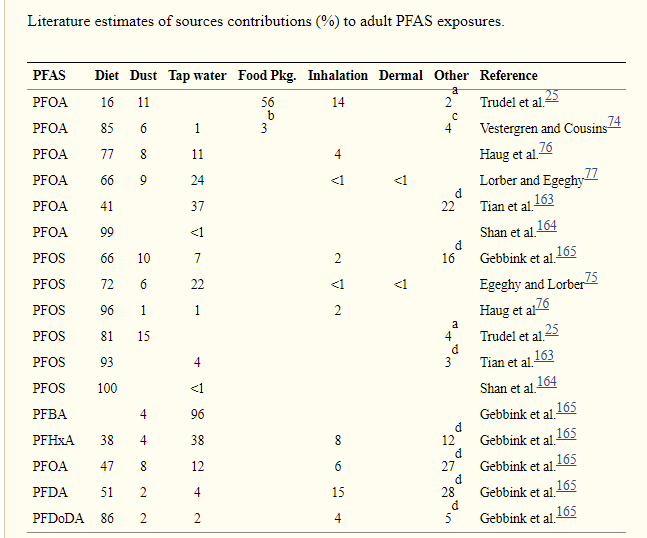 More attention must be given to formulating policy based on the science we know. Exposure to PFAS from household products can be rather quickly eliminated by altering the chemical production of these consumables. Eliminating exposure caused by severely contaminated groundwater, rivers, the ocean, and poisoned marine food chains will take a very long time, somewhat comparable to the nuclear half-life of spent radioactive fuel.  Half the battle is in discontinuing their use. 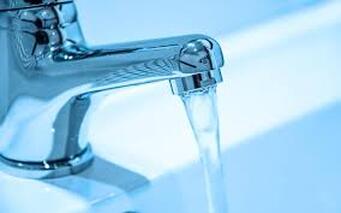 All the attention is on PFAS in drinking water - rather than protecting public health from PFAS in food.
The 17 samples of adult PFAS exposures shown above suggest that contamination from the diet is 4.3 times more likely than contamination from tap water. That disparity is likely to increase as municipal water systems across the country hurriedly install filter systems to reduce PFAS levels while states continue to set maximum contaminant levels for drinking water at a fraction of the EPA’s 70 ppt. Lifetime Health Advisory.

It's not a surprise. Surface water across the country  is contaminated from military and industrial sites that use and discard massive amounts of the substances.   Agricultural fields are contaminated with PFAS-laden sewer sludge and irrigated water is laced with the toxins.  Animals and humans consume contaminated crops.

People who drink from wells near military installations are an exception to the general rule, however. Many are likely exposed to PFAS contamination in drinking water in the  thousands of parts per trillion, while the military has still not robustly tested private wells near installations across the country.  Most states, with a few exceptions, are oblivious.

Some jurisdictions like Orange County, CA estimate that it’ll cost more than $1 Billion  to treat or replace its municipal wells contaminated with PFAS, much of which is caused by military activities. This  pathway toward protecting human health from the ravages of these chemicals is expensive, but it pales in comparison to the costs of protecting health from PFAS-poisoned food. 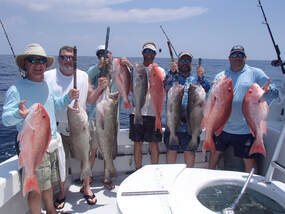 What's in the fish?
Imagine the devastating economic impact on thousands of communities nationwide with thriving commercial and recreational fishing industries. Imagine closing the Gulf of Mexico to oyster cultivation or charter fishing  because of high levels of the toxins or tightening fish Fish Advisories in New Jersey that would effectively ban consuming many species of fish caught in the state.

At the behest of Congress, The DOD published a report in March, 2018, Addressing Perfluorooctane Sulfonate (PFOS) and Perfluorooctanoic Acid (PFOA).    The report focused almost exclusively on results of drinking water and ground water testing at military bases across the country. It provides a brief mention of contaminated fish near an air force base in Michigan.

The data on Wurtsmuth AFB in Michigan showed groundwater contamination at 810,000 ppt. for PFOS/PFOA. (Many bases had higher levels.) We don’t know the amounts for other PFAS chemicals present in the water. The Air Force reported, “Installed groundwater treatment system to mitigate PFOS/PFOA discharges into Clark's Marsh, mitigating fish tissue accumulation in accordance with State requirements.” 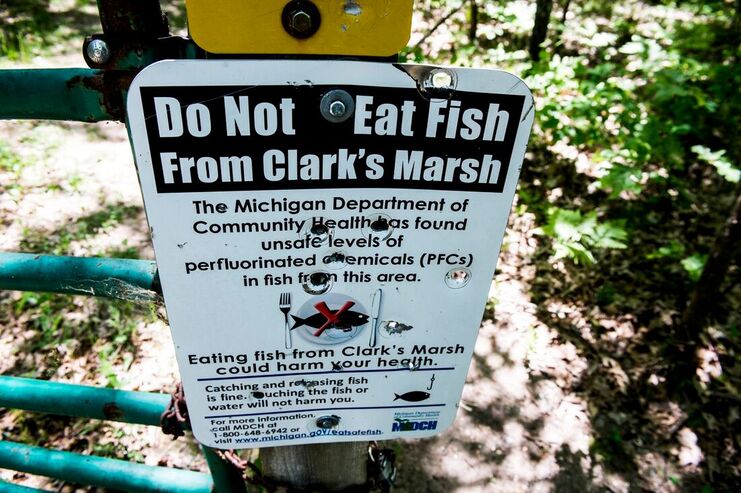 Michiganders aren't happy about their fish being poisoned by the military.
The reference to fish tissue in Clark’s Marsh was in response to tests Michigan had conducted three years earlier.  The state tested the water and the fish in Clark’s Marsh and found staggering levels of PFOS in the water at 5,099 ppt and in Bluegill/Pumpkinseed fish at 5,498,000 ppt. That’s not a typo. Rather, it is a testament to the bio accumulative powers of PFOS in fish.

Later in 2018, state environmental regulators demanded the Air Force  comply with a regulation that limits PFAS entering surface water bodies.  Air Force officials countered that “sovereign immunity” — the idea that the federal government can’t be sued without its consent — exempts them from the regulation.

An oyster in the Chesapeake Bay in Maryland near the burn pit of the Patuxent River Naval Air Station was found to contain 1,100,000 ppt of PFOS in 2002. A Smallmouth Bass a hundred miles away in the same state near several military facilities showed 574,000 ppt of PFOS. Of all varieties of PFAS,  PFOS is known to rapidly bioaccumulate in fish. 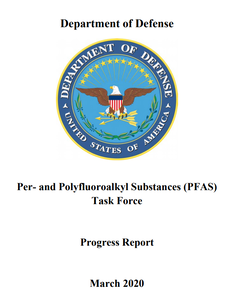 The DOD would prefer the public stays focused on drinking water as the primary pathway to human ingestion of PFAS.  It’s cheaper to remediate if the military is eventually forced to do so.  Take, for instance, the DOD’s PFAS Task Force Progress Report, released in March 2020, that fails to mention the threat to human health from food laced with PFAS.   Instead, the report focuses on providing drinking water that satisfies EPA guidelines, the need for continued scientific study, and efforts to develop a satisfactory replacement for the PFAS toxins used in fire-fighting foams.
​
Providing drinking water under the EPA’s 70 part per trillion (ppt) advisory still allows for people to consume dangerous levels of the toxins, considering that the nation’s top public health officials say 1 ppt in drinking water is likely to be  dangerous. One seafood dinner may account for the ingestion of higher concentrations of PFAS than drinking water containing 70 ppt of the chemicals for a lifetime. 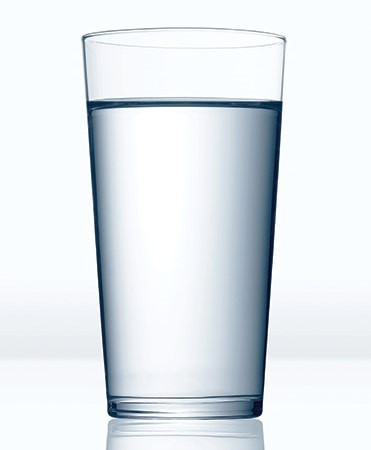 Drinking water is a small part of the overall PFAS problem.
Search for PFAS under the DOD website to find Per- and Polyfluoroalkyl Substances (PFAS) 101

The military poses this question, “How Does DoD Respond to PFAS Releases?”
​
Their answer focuses entirely on remediating drinking water. They state, “Although EPA’s Health Advisory is guidance and is not an enforceable drinking water standard, DoD proactively addresses drinking water impacted by DoD releases.”  They make it seem like they’re meeting drinking water “standards” out of the goodness of their hearts.
​
PFAS 101 continues,  “DoD’s priority is to quickly address PFOS and PFOA in drinking water from DoD activities under the federal cleanup law..” Sadly, the DOD has contaminated drinking water with a variety of toxic PFAS chemicals, not just the PFOS and PFOA which have been substituted by other toxic PFAS chemicals in the firefighting foams. The DOD says, “No one is currently drinking water above the Health Advisory level, on or off base, where DoD is the known source.”  We have no evidence to dispute their claim. The DOD has installed many drinking water filter systems on and off installations to bring PFOS/PFOA levels under the 70 ppt threshold.  These successes are routinely hyped in press releases, but they’re not telling us the whole story.  They’re probably only telling 15% of it. And they are not addressing how to contain the PFAS captured in the granular activated carbon (GAC) or other filtering systems.

Fine, water service providers on and off base are extracting high amounts of PFOS and PFOA out of the drinking water, but then what? They can’t burn it, they can’t bury it, and they can’t cover farm fields with it.  The stuff never stops killing and they're still using it.

The DOD’s PFAS 101 is a lousy introduction to this pressing public health crisis.

The DOD and its co-conspirator, the EPA, have allowed the public to consume vast quantities of “non-PFOS/PFOA” PFAS chemicals in drinking water while they refuse to address the fish and crabs and the oysters and the meat and the eggs and everything else people eat that may be contaminated by PFAS.

Congress shares the blame for the sole fixation on drinking water.  In 2017 the House Armed Services Committee asked for a briefing on the tests the DOD had conducted on water systems with PFOS/PFOA levels that were detected in excess of 70 ppt. and it asked for groundwater testing results.  The request resulted in the 2018 DOD report discussed above.  Congress failed to throw out a wider net by demanding the DOD to report on surface water contamination and the associated contamination of sea life, etc.  Congress has steadfastly refused to compel the EPA to take steps to protect the health of the American public from PFAS contamination. It is a testament to the influence of the chemical lobby.

In 1962, Rachel Carson warned humanity of the danger inherent in industrial chemicals. She wrote, “If we are going to live so intimately with these chemicals … taking them into the very marrow of our bones – we had better know something about their nature and their power.”

Today, we know something of their nature and their power, but we lack the political will to act decisively.

A google search for “DOD Seafood, PFAS, Fish”  finds no results for seafood or fish. ​