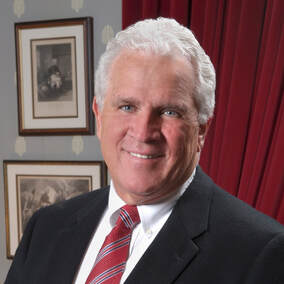 Maryland Sen. Thomas V. Mike Miller
I was saddened to hear of the passing of Maryland Senator Thomas V. Mike Miller, Jr.
​When I learned that the great senator had passed away due to complications arising from prostate cancer, I thought of the burn pit at the Chesapeake Beach Naval Research Laboratory - Chesapeake Bay Detachment just a mile and a half away from his home on the Bay. I wondered if this ongoing activity using PFAS firefighting foams had contributed to Senator Miller’s cancer.
​
The National Cancer Institute’s Division of Cancer Epidemiology and Genetics says there’s evidence from studies  that elevated levels of PFOA and other PFAS chemicals may be associated with an increased risk of prostate cancer incidence and mortality.
​
I met Senator Miller a few times.  He was the Cal Ripken of Maryland politics until the cancer caught up with him.  I liked him.  He came through on two measures I worked on eleven years ago that restrained the access military recruiters have to private information on children enrolled in the state’s public schools. 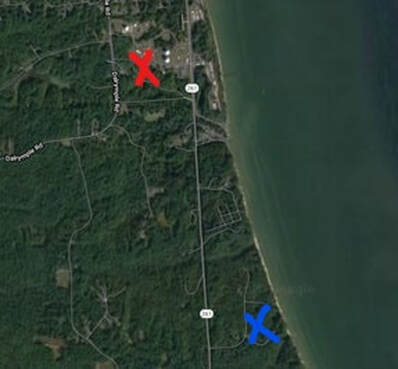 The red X shows the burn pad. The blue X shows Miller's house.
Senator Miller’s house is a mile and a half south/south east from the burn pit used by the Navy since 1968 to test PFAS. That site has 241,000 parts per trillion of PFOA and PFOS in the groundwater. These are massive levels of contamination, comparable to some of the worst sites in the country.

The Patuxent River Naval Air Station and the Indian Head Naval Support Facility in Southern Maryland have still not divulged the full extent of the contamination at their bases. The Navy has reported 70,000 ppt in groundwater in Annapolis and the army says the 87,000 ppt in the groundwater at Fort George G. Meade is draining into the Little Patuxent River.

In Chesapeake Beach, the navy reported PFOA in a well off of Locust Grove Rd. less than a mile from Miller’s home. The navy says groundwater flow in the area is not well understood, although  it is believed the shallow groundwater migrates south-southeast toward Miller’s home.  PFAS may travel for many miles in groundwater plumes.

The Maryland Department of the Environment says that the domestic wells around the base are likely drawing water from the deep Piney Point/Nanjemoy aquifer, but that it “cannot be definitively stated that this zone is under a fully confining and laterally continuous unit.”  That means the state is saying the groundwater closest to the surface may get through to the aquifer people drink from, and the agency is OK with that. Residents immediately outside the base are all on private wells, according to the navy, and a lot of them have not had their well water tested.
​
The firefighting tests using PFAS foams were conducted on the navy base in Chesapeake Beach by creating massive blazes on a concrete testing pad to extinguish open burning of petroleum products that included gasoline, diesel, and  jet fuel. 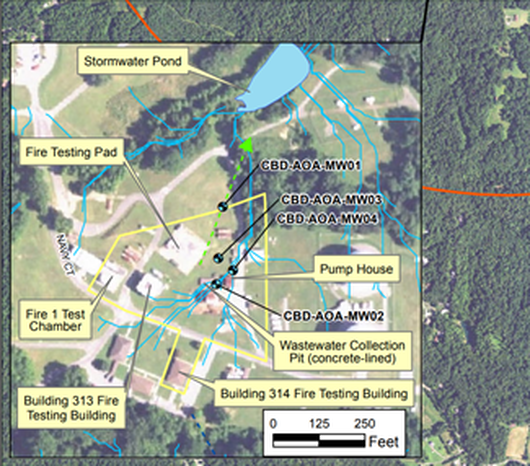 PFAS groundwater plumes may travel for many miles.
Wastewater containing these foams drained into a holding pit and was allowed to absorb slowly into the soil.  We don’t know how many thousands of gallons of PFOA/PFOS laced foams were used dating back to 1968. The entire area slopes toward the precious and fragile Chesapeake Bay.
​
The liquid wastes may also have been disposed of through the sanitary sewer system at the site.  NAVFAC Page 27  With all of the technology available to the Navy, the sewage system operates at a Neanderthal level.

The Randle Cliff facility operated by the navy was constructed in l954 and discharges wastewater directly into the Chesapeake Bay after treatment for a small number of heavy metals, although not PFAS. This is important because the wastewater is likely to contain dangerous levels of PFAS that contaminate seafood that Senator Miller is likely to have eaten.

The navy’s treatment plant produces nearly 10 wet tons/year of sludge which is dried in open air sludge beds.  The materials are shipped to the Solomons Wastewater Treatment Plant Sludge Receiving Station. From there, the sludge is buried at the Appeal Landfill in Calvert County.

In addition, the town of Chesapeake Beach may have exacerbated Senator Miller’s health condition. All wastewater facilities generate and release PFAS toxins.  The town’s treated effluent is discharged into the Chesapeake Bay by means of a 30-inch pipeline that extends into the Bay to a point approximately 200 feet from the seawall.

Although the town’s remaining sludge is transported to the King George Landfill in Virginia, sludge from the Patuxent River NAS is sent to various farms in Calvert County.  If Senator Miller ate local produce, he could have consumed additional PFAS.  See:  Calvert County Sewage Plan

The following graphic shows that Calvert County is pretty much off the charts with its prostate cancer rates. Of course, it would take political will, a funding source, and sustained study to actually prove causation.

The state of Maryland is content to look the other way.  When demands were made of the St. Mary’s County, Maryland Health Department to test the wells of residents close to the boundary of the Patuxent River NAS, health authorities replied that they were comfortable following the lead of the Navy which said testing outside of the base was unnecessary because the contaminated shallow aquifer could not reach the deeper aquifers.  Are we absolutely sure?

Maryland, a state with a lot of water and numerous military installations in a small geographic area, refuses to regulate these substances, which are linked to a host of cancers and fetal abnormalities.

​The U.S. Environmental Protection Agency does not regulate PFAS.  They can’t. If they did, the DOD would have to pay the tab for cleanup and it ain’t gonna happen.  It’s up to the states.

It’s generally taboo in America to speculate on the sources of cancer and that’s because of the role played by the military and highly influential corporations in contaminating our environment. Almost all of the focus regarding cancer is on treatment, while a multi-billion-dollar industry has grown up to profit from it. Investigating and mitigating carcinogenic industrial contamination involves tremendous liability for the polluters who largely call the shots in Annapolis and Washington.