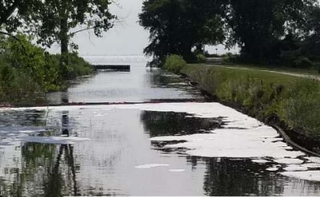 June 7, 2018 - Aqueous Film Forming Foam (AFFF) from the U.S. Coast Guard Station
on the Selfridge Air National Guard base in Macomb County, Michigan accumulates in a stream leading to Lake St. Clair.
On July 10, 2018 Michigan’s MLive Media Group reported that a U.S. Coast Guard maintenance hangar at the Selfridge Air National Guard Base near Mount Clemons, Michigan experienced an  “inadvertent discharge of about 20 gallons of AFFF foam” on June 7.  AFFF is aqueous film-forming foam that contains toxic chemicals containing a variety of per- and poly fluoroalkyl substances, or PFAS. They are used in fire-fighting foams.

The report of the discharge of the substances follows a predictable pattern of downplaying releases of the toxins by the four branches of the military, although this time, there was a twist - the Coast Guard was the guilty party - and the  National Oceanic and Atmospheric Administration (NOAA) reported on the leak, contradicting press reports on the severity of release. The Coast Guard falls under the Department of Homeland Security, rather than the DOD.

On July 11, the day after the MLive story, NOAA’s Office of Response and Restoration reported that the Coast Guard had spilled “an estimated 1,000 gallons of AFFF” on June 7.  It was a major faux pas for the Coast Guard, although no one was paying attention.

The NOAA reported:  “Of environmental concern is the product of biological degradation of AFFF called perflourooctane sulfonate (PFOS) which is persistent and unlikely to naturally degrade. PFOS are also known to bioaccumulate. U.S. Environmental Protection Agency lab results confirmed the presence of PFOS at levels above the levels that existed prior to the AFFF discharge. PFAS are not federally regulated, and there are no federal limits for discharges or releases.”

The NOAA said that a containment boom was put in place at the discharge point to prevent foam from reaching Lake St. Clair. Clean-up operations were completed by June 15, 2018, according to the NOAA. It’s wishful thinking. Clean-up efforts could last for a thousand years and still not manage to remove the chemicals from the lake. Lake St Clair provides a habitat for numerous species of fish and serves as a drinking reservoir for 35,000 people. 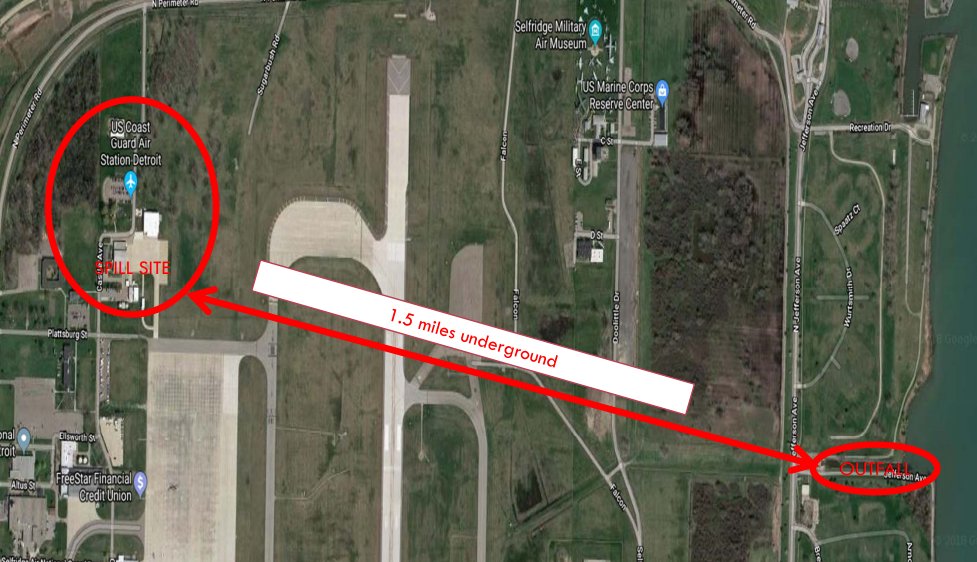 Source: PFAS Case Study: AFFF Spill - U.S. Coast Guard Sector Detroit, Selfridge Air National Guard Base
The massive releases from the Coast Guard station traveled 1.5 miles through an underground storm drain system that discharged the toxins into Lake St. Clair.
​
Concentrated levels at the source were in excess of 1 million parts per trillion. Groundwater wells at the site showed  PFAS contamination at 2,490 ppt. while the state requires the substances not to exceed 70 ppt. 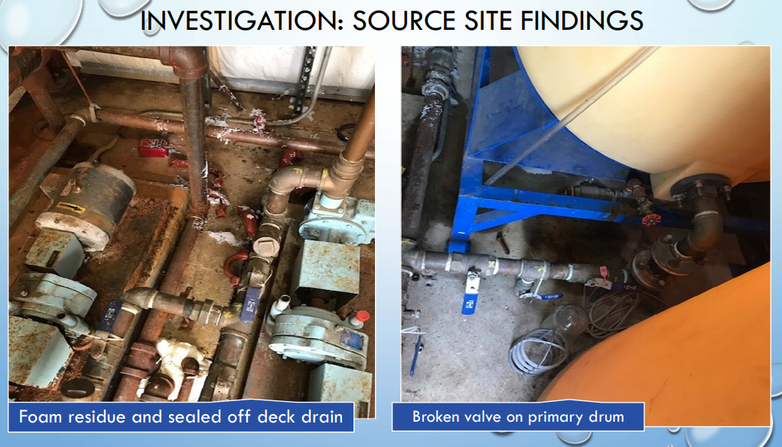 PFAS at 1 million parts per trillion were found at the site of the leak. https://www.rrt5.org/Portals/0/docs/Harris%20-%20RRT%20Presentation.pdf
​The state of Michigan had tested surface water leaving the base in February, 2018, four months before the Coast Guard spill, although the results were not immediately released to the public. MLive reported on July 24, 2018, that it had received data through the Freedom of Information Act of tests for PFAS conducted by the Michigan Department of Environmental Quality. The state found high levels of PFAS contamination in the Clinton River and Lake St. Clair.

Five storm-water drainage outfalls around the base tested positive for PFAS in February, 2018. Six PFAS compounds containing 5,009 ppt were found in the drainage entering the Clinton River.  PFAS entering Lake St. Clair was found to contain 947 ppt.   Towns around the lake, including New Baltimore and Mount Clemens, found PFAS in the drinking water they draw from the lake.

Michigan has actually performed better than most states, like Maryland, discussed below, in managing PFAS contamination.  Michigan is in the process of establishing maximum contaminant levels for drinking water at 8 ppt for PFOA and 16 ppt for PFOS, along with limits on several other types of PFAS chemicals. Michigan has been proactively testing surface water near military installations and has established fish advisories in nearby bodies of water found to contain high levels of the toxins. Maryland has barely started on the process.

See JD Supra’s Federal and State Evolving PFAS Regulations and Standards to find out what your state has done regarding these toxins in drinking water.

The US Coast Guard has escaped the limited scrutiny directed at DOD installations nationwide regarding PFAS contamination. When the Coast Guard published The Curtis Bay 2019-2029 Yard Facilities Master Plan it revealed the presence of PFAS in  groundwater on the facility, although the news went unreported.

Groundwater testing by the Coast Guard in 2019 showed the presence of PFAS in the groundwater along the shore of Curtis Creek, just south of Rt 695, Baltimore’s Beltway, about 6 miles south of downtown Baltimore. The Coast Guard did not reveal the levels of the contamination discovered. Maryland’s public is out of the loop while the Maryland Department of the Environment is a non-actor.

For years, a massive burn pit on the shore of Curtis Creek was used for training purposes that involved the use of fire-fighting foams containing PFAS chemicals. 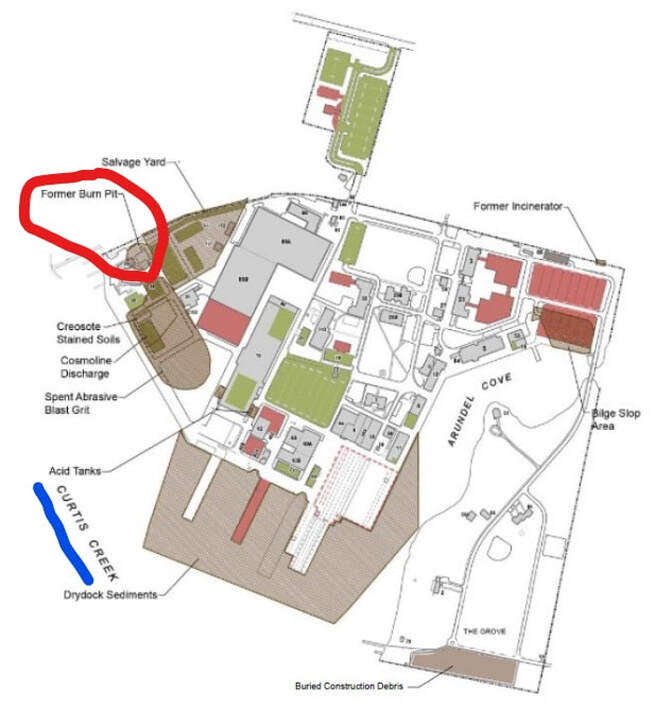 “PFAS are a large group of chemicals that have been used in a variety of commercial products including carpets, clothing, furniture fabrics, and in the firefighting agent aqueous film forming foam. They are the subject of emerging environmental regulation and will likely be regulated in the next 5-10 years. The Yard will need to stay engaged with the EPA and MDE to determine the best way to treat these contaminates.”

Until now, the Coast Guard hasn’t needed to “stay engaged” with the EPA or the MDE because neither agency is prepared to regulate the materials. Maryland is behind most states in regulating PFAS.

Curtis Creek is profoundly contaminated by a host of toxins. Volatile Organic Compounds, Semivolatile Organic Compounds, inorganics, arsenic, selenium.  pesticides and polychlorinated biphenyls (PCB’s) have been detected in surface water and sediment of the waters adjacent to the Yard. People who consume fish, including rockfish, perch, catfish and Chesapeake Bay blue crab from Curtis Creek or Arundel Cove could be exposed to the contaminants.  The Coast Guard has used the creek like a giant toxic septic tank. 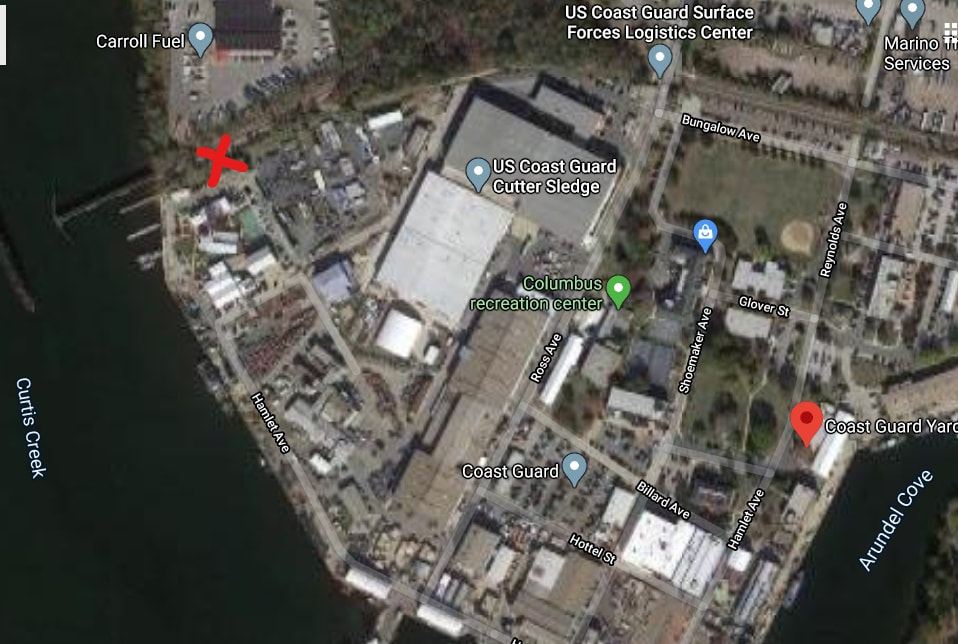 On June 25, 2020  Bloomberg Law published a story, Destroying Forever Chemicals Ignites N.Y. Town’s ‘Worst Fears’ that revealed  military installations from 25 states, including Maryland, shipped drums containing 2.5 million pounds of materials with high concentrations of PFAS to be incinerated at a Norlite facility in Cohoes, New York. The New York State Department of Environmental Conservation revealed the names of the installations from each state. 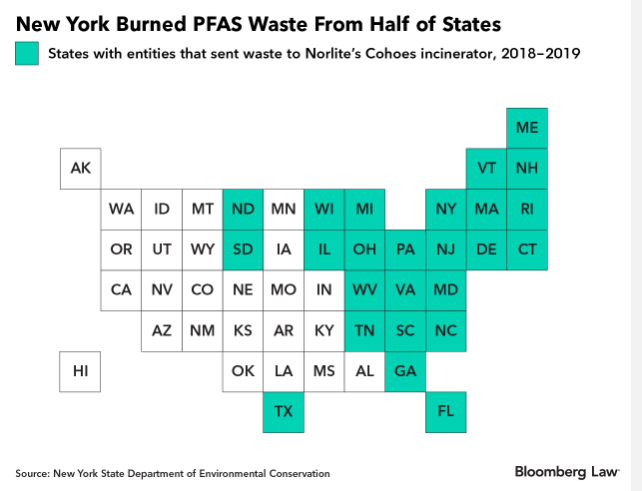 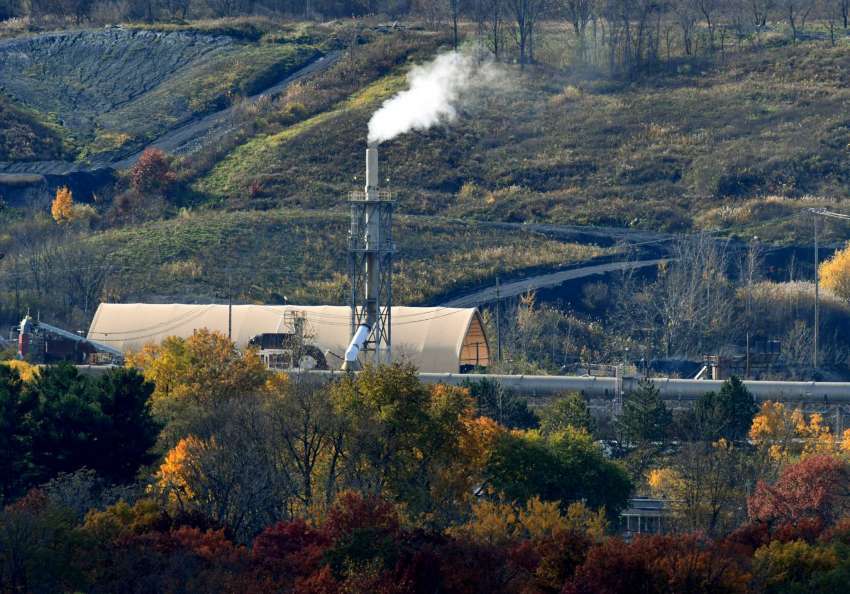 Toxins from a Coast Guard facility in Maryland have contaminated Cohoes, a community in upstate, New York.
The Norlite incineration plant in Cohoes managed to burn two million pounds of the PFAS-laden materials composed mostly of unused AFFF containing highly toxic PFOS and PFOA, before the operation was shut down by the state. The smokestack is just 200 meters from a public housing project.

Scientists are concerned the materials, which are used to extinguish super-hot petroleum fires, cannot be entirely incinerated. Instead, the process, they argue, is “raining down a witch’s brew” of poisonous substances that are linked to a host of cancers.

In the last few years DOD and Coast Guard facilities have collected thousands of drums containing AFFF to be incinerated. The foams contain PFOS and PFOA, two of the most lethal varieties of PFAS.  The military has replaced the lethal foams with other toxic varieties widely used at installations around the world. In the last year, the DOD has been is a rush to incinerate the remaining stockpiles.

The Norlite incineration facility is owned by Tradebe Treatment and Recycling LLC, a firm with close ties to US Vice President Mike Pence. Tradebe is  facing a lawsuit from Earthjustice  to stop the incineration.  Tradebe is managing the incineration of millions of pounds of the substances in the eastern half of the country. Another company with ties to Pence, Heritage Environmental Services, LLC, is incinerating PFAS in the western U.S.

In addition to the Curtis Bay Coast Guard Station, six installations in Maryland shipped the contaminants to be incinerated:

For the most part, these Maryland installations, and many others, have escaped regulatory, media, and public scrutiny over the use of these chemicals and their legacy of perpetual contamination.