MILITARY POISONS
Impact of PFAS Contamination
at the Burlington Air National Guard Base
(part 1 of a 3-part series)
By Pat Elder
January 22, 2021 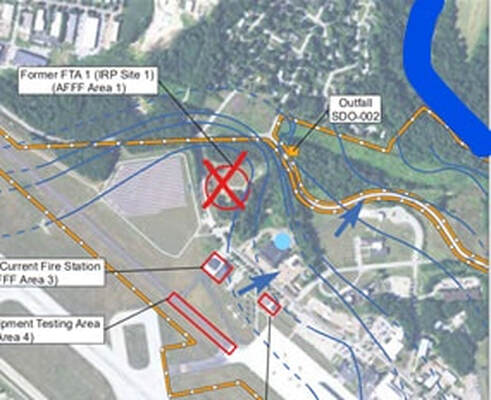 The former fire training area (red x) is 1,600 feet from the Winooski River. The blue arrows show the groundwater flow. Surface water also runs to the river.
​This is the first article in a three-part series on the contamination caused by the use of per-and-poly fluoroalkyl substances (PFAS) at the Burlington,                  Vermont Air National Guard base. This work is made possible through the generous support from the Women’s International League for Peace and Freedom (WILFP-US Section), the WILPF Burlington Branch, and the Center for Health, Environment, and Justice - a project of the Peoples Action Institute.
The Burlington Vermont Air National Guard base has severely contaminated the Winooski River and the environment throughout the region with PFAS chemicals. The levels of the toxins in the Winooski suggest that fish in the river and in Lake Champlain may be unhealthy to eat. PFAS are per-and-poly fluoroalkyl substances that are used in fire-fighting foams on base. The chemicals are linked to a host of cancers and fetal abnormalities.

Richard Spiese, a hazardous site manager with the Vermont Department of Environmental Conservation described the PFAS contamination of groundwater, “It’s a large plume. In some places, it’s probably over a mile long, and it goes from the source area all the way to the Winooski River.” The source area Spiese is referring to is the former fire training area on the Vermont National Guard base.
Spiese said he was “relieved” that the levels of PFAS in the Winooski itself are “so low” and he doubts that the state will respond by issuing an order not to eat fish from the river. An examination of the reckless use and disposal of these chemicals by the Vermont National Guard shows the state is downplaying the impact on public health, while the local press is also minimizing the  threat posed by these chemicals.

Here, I’ll explore the history of the burn pit and the contamination it has caused to the groundwater and surface water.  In Part 2,  I’ll examine the development of surface water quality standards, and I’ll look at the likelihood of widespread contamination of fish - without the benefit of data concerning PFAS levels in fish in the Winooski.  In Part 3,  I’ll analyze the contamination of storm water flowing from the base and I’ll look at how the sludge produced at treatment plants creates a pathway for human exposure to these toxins.  I’ll  examine the state’s laudable efforts to establish regulations for PFAS and I’ll report on what the Vermont Air National Guard has to say about the toxic mess it has created. 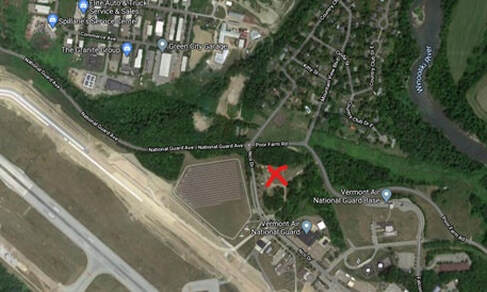 Aqueous film-forming foam, or AFFF began being used in 1970 to extinguish the blazes. AFFF contains PFAS chemicals.
For three years, (1970-1973)  training exercises were held 78 times, using as much as 2,000 gallons of JP-4 jet fuel each time. That would total up to 156,000 gallons. For an additional seven years (1973-1980) exercises were held 84 times, using 300 gallons of jet fuel, totaling 25,200 gallons. Altogether, the Vermont Air National Guard dumped and ignited up to 181,200 gallons of jet fuel between 1970 and 1980, when use of the area was discontinued.
​
This is a horrific environmental crime in itself, but the use of firefighting foams  containing toxic PFAS to extinguish these mushroom cloud blazes is a far greater environmental disaster. Although the Air Force knows exactly how much AFFF it has used over the years in Burlington, it hasn’t made the figures public. 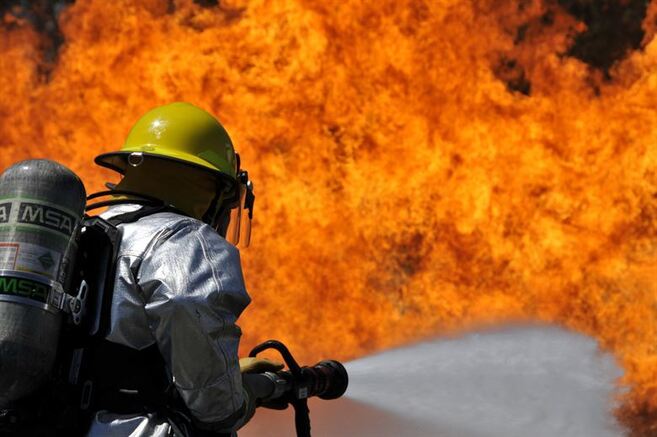 A guardsman extinguishes a flame using PFAS-laden foams.
Interestingly, jet fuel was in short supply during the oil crisis of 1979. So, in that year approximately 1,500 gallons of various mixtures of acetone, alcohol, cyclohexanone, methyl ethyl ketone, methanol, propyl alcohol, and waste paint pigments were collected from the surrounding communities and burned to continue the required training.  Generally, service members exposed to the noxious blazes have been unable to sue contractors or the government for injuries sustained.

The uppermost 3 feet of PFAS-contaminated soil was excavated from the burn pit in September, 1980 and transported off site for disposal. We don’t know what happened to these extraordinarily toxic shipments, although, as recent as last year,  the Burlington base had been shipping PFAS-laced material for “final disposal” to  the landfill operated by  Envirosafe Services of Ohio, located in Toledo near the banks of the Maumee River where it empties into Lake Erie.

Scooping 3 feet of soils from the 150-foot diameter crater removes a tiny portion of the contaminants. Approximately 53,000 cubic feet of soil was removed, but that is like a grain of sand compared to the tens of thousands of acres in the Winooski watershed contaminated by these chemicals.

Perhaps even more frightening is the notion that soil, and groundwater are contaminated far below the surface. For instance, groundwater at the former Burlington ANG fire training area was found to contain a total of 71,010.5 parts per trillion (ppt) of 13 types of PFAS. That well drew water from 25 feet down. Another well nearby that went down 49 feet found 25,672 ppt of the same 13 types of PFAS.

Until recently, Department of Defense reporting on PFAS levels in the environment has been focused entirely on PFOS and PFOA, just two of the more than 6,000 varieties of PFAS. The EPA and Congress have followed suit by studying the two compounds, although deciding not to regulate them. The public was kept in the dark from the myriad of dangerous chemicals.  This historic DOD report on PFAS in March, 2018 focused entirely on PFOS and PFOA in drinking water and groundwater.

Vermont has pushed the envelope somewhat by setting a drinking water/groundwater enforcement standard of 20 ppt for any combination of PFOA, PFOS, PFHxS, PFHpA, and PFNA. The regulation went into effect in July of 2019. The EPA has set a voluntary advisory of 70 ppt that only includes PFOS and PFOA. The federal response to the threat of PFAS chemicals is something like the federal response to the coronavirus under the Trump administration. There’s little going on from the top down. It’s up to the states, and most states have still not acted to establish mandatory limits of PFAS in drinking water or any other medium.

So, why is Vermont stopping at just five PFAS? Is there something extraordinarily harmful about the five? Not really, because once we look at these PFAS chemicals closely, they’re all pretty horrible. After all, an increasingly loud chorus of American public health officials has been warning the American public not to consume any PFAS chemicals. Period. They’re toxic.

Vermont doesn’t regulate PFHxA. The groundwater contained 14,000 ppt of this chemical at the burn pit.  It is associated with neonatal abnormalities and respiratory diseases. Is Vermont OK with this?  And what about PFBA?  A Danish study found that people with elevated levels of PFBA were more than twice as likely to have a severe form of Covid-19. There’s 780 ppt of the toxins in Vermont’s groundwater.  Also, when PFBA is sent to landfills it is known to be released into the air. (See Sec. 3-2)

The EPA has approved analytical methods that measure 29 PFAS in drinking water. Why isn’t Vermont regulating all of these, for starters? 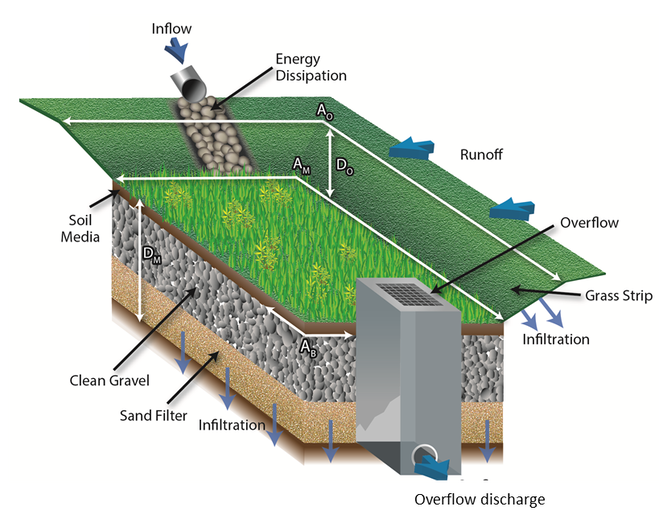 Infiltration trenches pass unregulated PFAS chemicals into the ground.
Until 2017, shallow groundwater on base was diverted into a groundwater collection trench and pumped to the Airport Parkway Wastewater Treatment Plant (WWTP) in South Burlington. A water sample collected in 2016 by the EPA from this trench showed PFOS and PFOA had concentrations of 38,000 ppt and 9,300 ppt, respectively. We don’t know the concentrations of the other PFAS chemicals.
​
Since August 2017, groundwater from the collection trench has been treated by routing it through two granular-activated carbon filter systems. Unfortunately, the PFAS captured by the filters cannot be disposed of without potential harm to the environment. Treated groundwater below the Vermont enforcement standard of 20 ppt for the basket of five PFAS is pumped to infiltration trenches at the site and is no longer sent to the WWTP, although the other types of PFAS, some possibly in the tens of thousands of parts per trillion, may pass through into the ground.

Hydrologists explain that the till/bedrock aquifer on base appears to be connected hydraulically to the overlying surficial aquifer, particularly in areas where the surficial clay layer is absent. In layman’s terms, toxins poured into the ground may reach waters deep down that are used by people with private wells. Burlington is unfortunate in this regard because there are some bases across the country, with heavy PFAS usage, where engineers have concluded that the surficial aquifer - that is, the water in the ground near the surface - is separated from the deeper aquifer. This claim by hydrologists has caused the DOD to refuse to test private drinking wells even when they are contiguous to military installations with high levels of PFAS in the surficial aquifer. Sometimes, state and federal regulators disagree whether contaminants in the surficial aquifer are able to reach the deeper aquifers.

Well 59, located on a dairy farm immediately north of the base, had a combined sum of 381.13 ppt of 13 varieties of PFAS. The Vermont basket of five chemicals contained 257.03  ppt while the water the cows drank also included an additional 124.1 ppt of 8 other kinds of PFAS. Although federal and state officials across the country are primarily focused on drinking water, we must be concerned with the food we eat.

For PFOS and PFOA, the two types of PFAS most frequently studied, food tops drinking water as the most prevalent way the toxins enter our bodies.